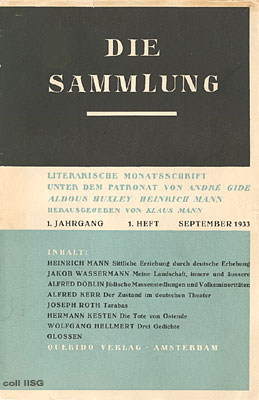 < previous | next >
Die Sammlung
Die Sammlung, literary magazine for exiled German-language writers published in Amsterdam, was a platform for many De Lange authors as well.
24 issues were published by Querido from 1933 till 1935.


From the introduction:
This magazine will serve literature; that is to say, that sublime matter which concerns all nations on earth, not just one nation. Some nations however err in such a serious way that they defame their very best literary patrimony, they feel ashamed of it and no longer tolerate it in their own country. In these countries, literature is being raped. To escape rape, literature flees such a country....
top