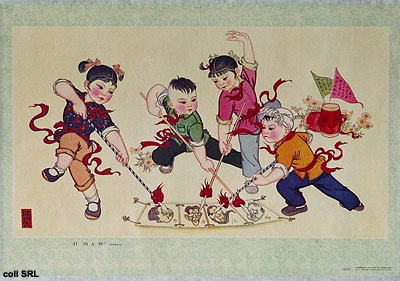 After Mao's death in 1976, his widow Jiang Qing tries to seize power with three other high officials. This so-called Gang of Four represents the fanatically orthodox current in Chinese communism. They lose the battle for power to the moderate reformers, are brought to trail in 1980 and sentenced to life imprisonment. Jiang Qing dies in 1991, probably by committing suicide. On this poster, a New Year print from the village of Yanliuqing, caricatures of the Gang members are pierced with spears by playing children.
top