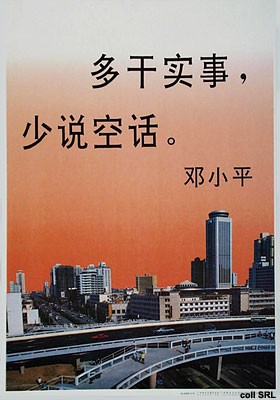 Deng Xiaoping is the main architect of the economic reforms. He abolished the idolization of political leaders; his portrait appears on posters only very rarely. This pronouncement is illustrated with a photograph of a modern cityscape. Note the cars pasted in: not all of them follow the direction of traffic.
Deng, born in 1904, joined the Communist Party in 1924 and held high offices until he was expelled at the start of the Cultural Revolution. In 1973 he made a comeback, only to be expelled again in 1976. In 1977 Deng returned for the second time and became the most important man in the Party after the brief interlude of Hua Guofeng. He died in February 1997.
top