A research network on Latin America, social mobilisation and the centrality of labour 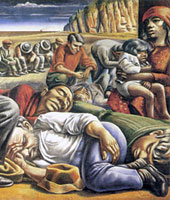 LabourAgain is an attempt to put back academic debates on the track of a more socially compromised research, one in which the activities of people at work, the struggles they engage in and the organisational and political strategies they produce assume a central status, accordingly to the position workers have in capitalism. Then, we want to go back to labour and, in this sense, labour is again the centre of our project. But again does not mean to go back to the mythical misrepresentation of labour so efficiently fought back by many scholars in recent years. Nor it means to ignore the roads opened from new theoretical perspectives. What again does definitely mean is to reject the dismissal of the centrality of labour built on mythologies and caricatures or both.

LabourAgain aims to open new spaces for theoretical, historical and comparative research on the forms of labour in Latin America from different fields of the social sciences and this through periodical debates, a discussion list and on line publications. Although the result of an academic initiative the project will also attempt to involve trade unionists, social activists and militants so as to bridge the gap between social reality and the interpretations researchers makes of it. If you like to participate, please contact Maurizio Atzeni and Pablo Ghigliani.